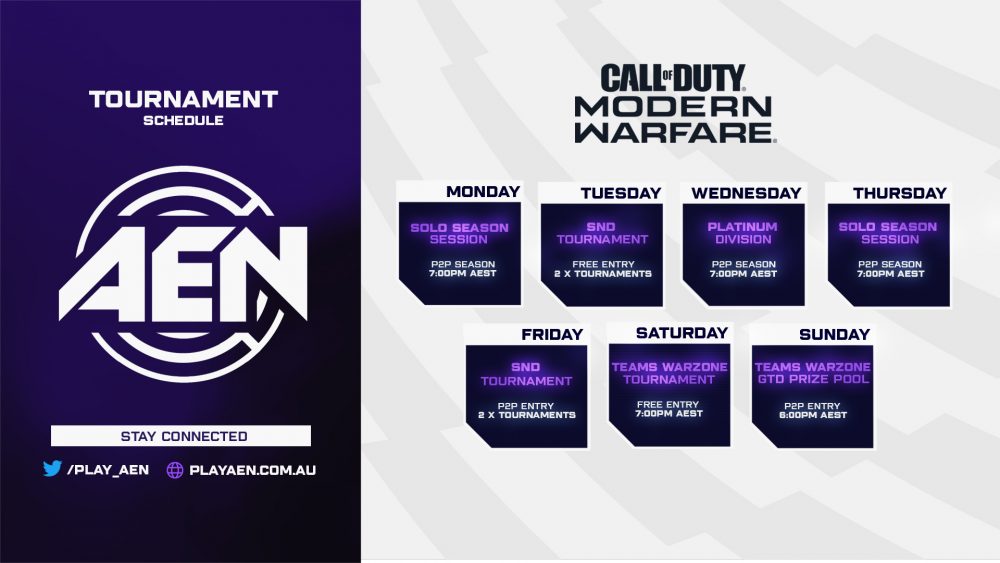 Over the past few weeks, we have been working hard to create a solid schedule for our Tournaments & Seasons!

We have broken the week down to include SND & Warzone Tournaments and Free to play / Pay to play variants so you can get the best of both worlds!

MONDAY – Monday is dedicated to our Warzone Solo season. Those who have registered will have a 3 hour session (7pm – 10pm AEST) to submit their best 3 matches to be added to the standings.

TUESDAY – Tuesday has been allocated to small team SND Tournaments (2v2, 3v3 and 4v4) Tuesday night’s will be FREE to play Tournaments, with the winners receiving free entry into Fiday’s P2P tournaments. Every Tuesday we will have TWO Tournaments (7pm and 9pm)

WEDNESDAY – Wednesday is dedicated to our 5v5 Variant season, or better known as the ‘Platinum Division’. Each week teams will compete in their scheduled matches in hopes of moving to the Finals and walking out with their share of $4000 AUD!

FRIDAY – The P2P versions of our small team SND Tournaments. Paid entries means that prize money is allocated to the winners! Are you ready to put your money where your mouth is? Again, we will have TWO Tournaments on this night.

SATURDAY – Saturday will be dedicated to Team Warzone Tournaments. Whatever playlist is in the game. We will have them available! These Tournaments will be FREE entry with the winners receiving entry to Sunday’s Tournament.

SUNDAY – Every Sunday will have a P2P Team Warzone Tournament with GUARANTEED PRIZE POOLS! The same format as Saturday’s Tournaments, but the paid entry variants.

Some days may have extra Tournaments added so make sure you are following us on all of our social media platforms to keep up to date!- VertexJDU